The 12th annual Northwest Undergraduate Mathematics Symposium (NUMS) was planned to take place on Saturday, April 18, 2020, in conjunction with the 3rd annual Pacific Inland Mathematics Undergraduate Conference (PiMUC), at Seattle Pacific University in Washington. And then COVID-19 happened. As national and international conferences (not just in mathematics) around the world were being cancelled, opportunities for students to present their work were evaporating. The NUMS steering committee, along with the PiMUC organizers, were determined to hold the line. A last minute effort (only a month before the meeting date) was started to move the entire meeting online to a virtual venue via Zoom.

NUMS and PiMUC are regional mathematics conferences providing a venue for undergraduate students in the Pacific Northwest to present mathematical research and projects, including REUs, senior projects, COMAP solutions, etc.

The Oregon State University Math Club, the Pi Mu Epsilon (PME) Oregon Beta Chapter, the OSU student chapters of the Society for Industrial and Applied Mathematics (SIAM), and the Association for Women in Mathematics (AWM) organized the first annual NUMS meeting at Oregon State University (OSU) in Corvallis on Saturday, May 9, 2009. There were 33 attendees including 17 speakers filling two parallel sessions. The local venue served as an effective training opportunity for the national stage; several of the first NUMS participants went on to present at MathFest 2009 in Portland. In fact, two of the six 2009 Pi Mu Epsilon Presentation Prize winners were NUMS participants! Subsequent NUMS meetings have been held throughout Oregon and Washington including at Willamette University, Linfield College, Reed College, University of Washington, Tacoma, Western Washington University, Lewis and Clark College, among others. The conference series has been supported by the National Science Foundation and PME.

PiMUC was first hosted at Gonzaga University in 2018. Many of the universities and colleges in the Pacific Inland Region are isolated. The conference goal is to provide an opportunity for these students to meet each other, show off their hard work, and bond over their love of Mathematics. 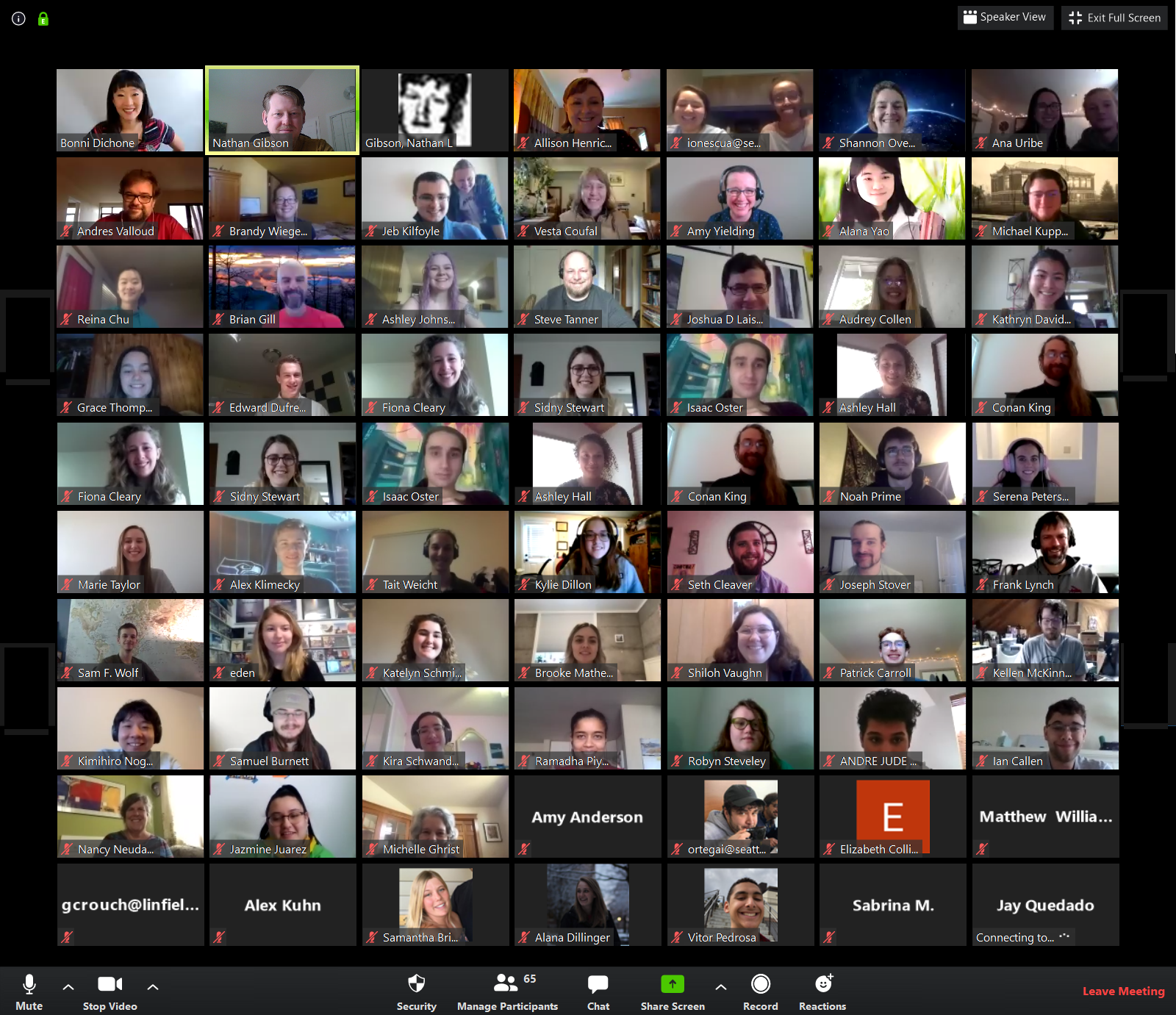 For 2020, the combined meeting was virtually hosted by OSU using Zoom.  There were 28 talks and 3 posters presentations, with 65 participants overall connecting from their respective homes all over the Pacific Northwest. Several of the talks were group presentations. Students showed off their technological prowess by taking control of each others’ shared screens seamlessly as they took turns talking. One student in particular, Jazmine Juarez, was a speaker in three different presentations! She had participated in both an REU at UCSD and a research group at EOU.  Originally her two EOU research partners were going to present by themselves, but they were each home in very isolated rural villages in Idaho and Oregon.  In fact, when they practiced their talks, the internet would often drop out. Thus for the meeting, Jazmine was the one sharing her screen to ensure the talks didn’t get interrupted. 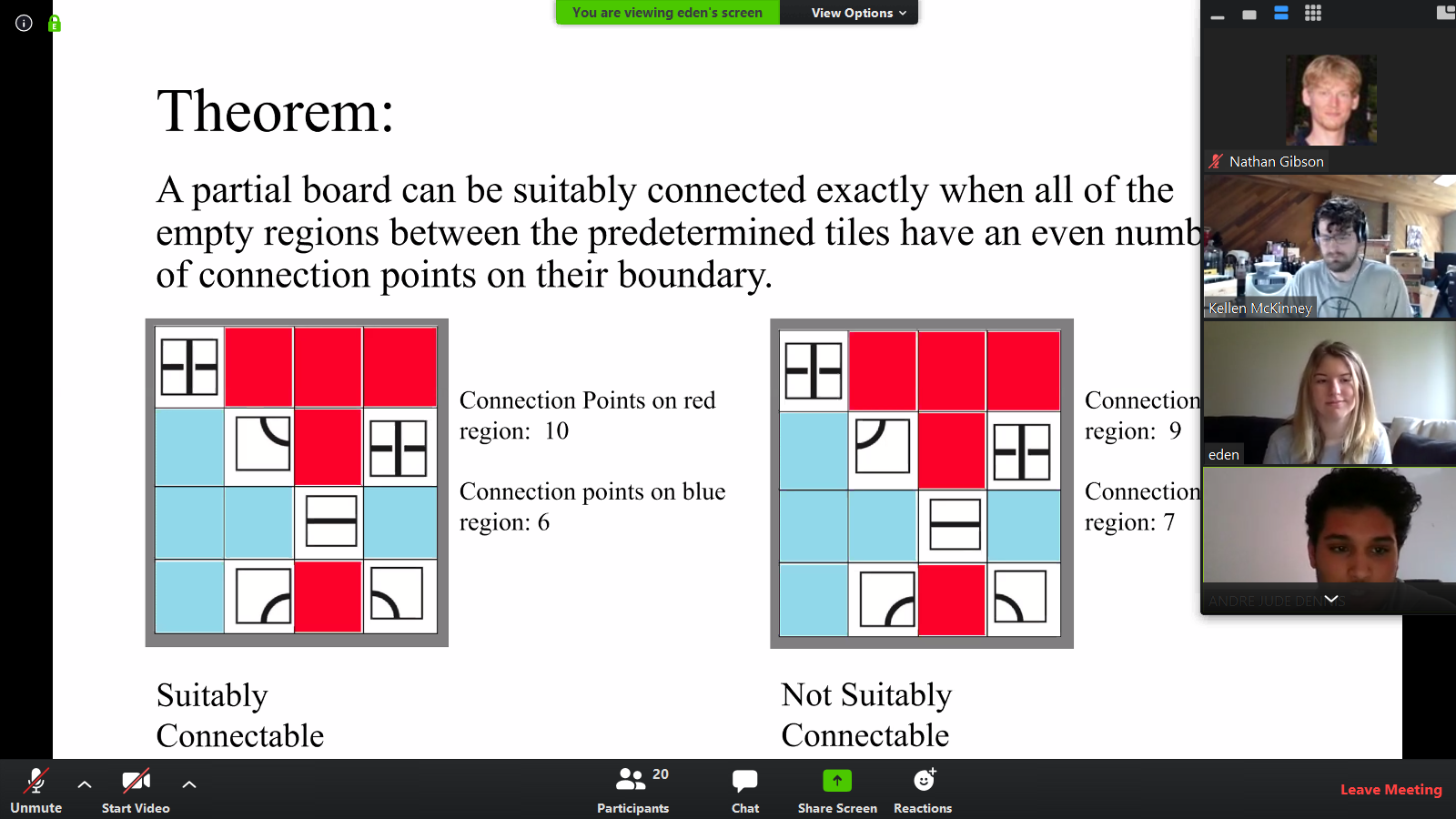 One of several group presentations.

The presentations and posters were given in three different "rooms"; there were two Presentation Sessions with one Poster session in between. The poster session featured the presenter sharing their screen and viewers were able to ask questions directly to the presenter, rather than having a formal talk. The poster PDF files were posted in advance on the PiMUC website so that viewers could zoom in for a closer look. 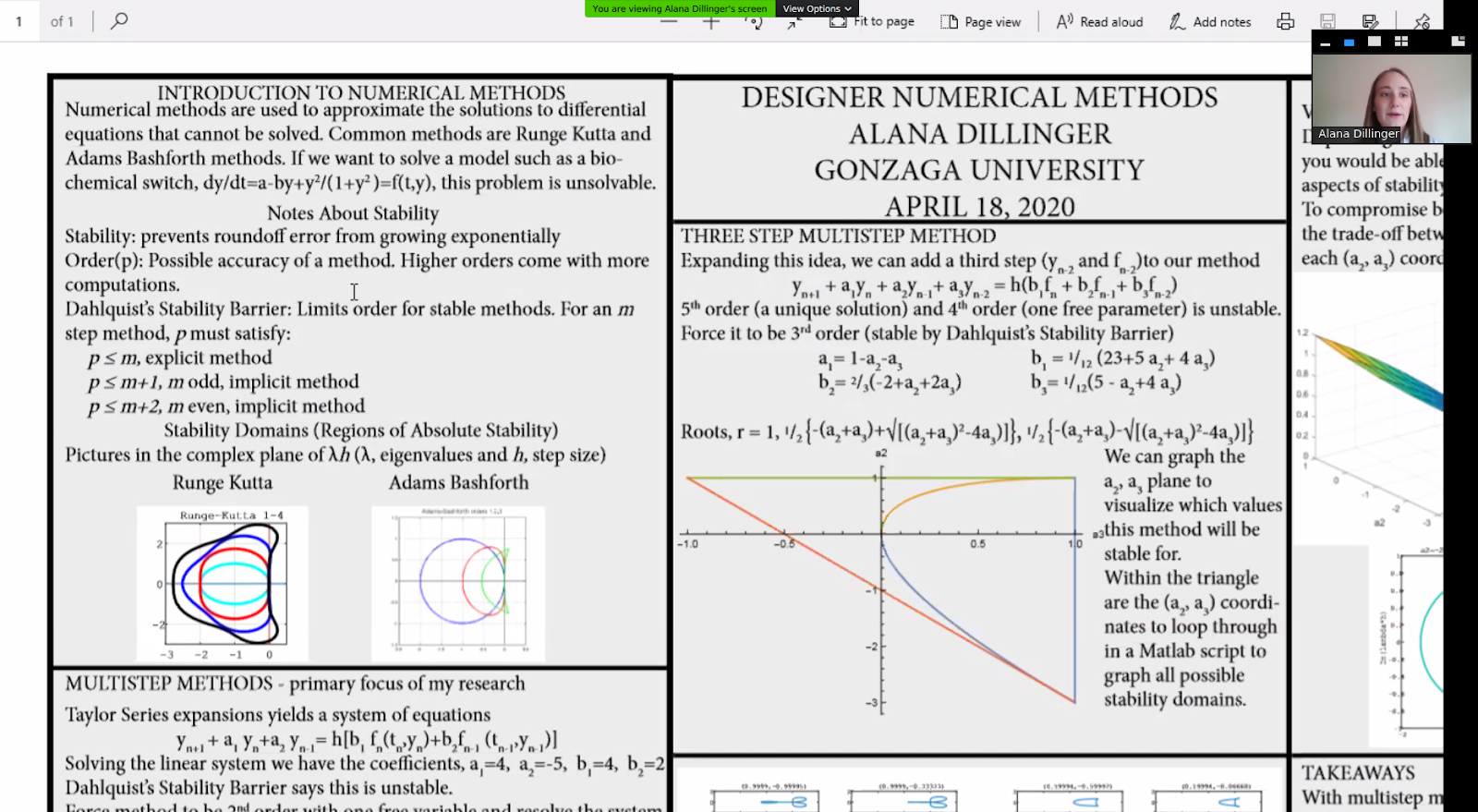 One of several virtual poster presentations.

Other students took advantage of the virtual format by making great use of videos of numerical simulations, which are less common in traditional presentations (mostly because speakers at in person meetings are discouraged from using their own computers due to the time required to change out cables!). These included OSU’s own Michael Kupperman, who spoke on “Stochasticity and Stability in Ecological Dynamics: Walking the line between Existence and Extinction”. Video of a numerical simulation by Michael Kupperman.

As is usual for the NUMS meetings, presentation prizes were awarded. This year the cash prizes, totalling $200, were sponsored by a Prize Grant from Pi Mu Epsilon, which was matched by the MAA PNW Section. The 31 presentations were judged by (anonymous) faculty participants using a Google Form. Over 120 votes were cast (thus an average of 4 judges per talk), rating talks based on Organization, Presentation, Understanding, Research Quality, and other considerations. The top four presentations were honored. The presentation winners were: Kathryn Davidson, UWT (First Place), Brooke Mathews and Isaac Ortega SU (Second Place), Amy Jenson, UASE (Third Place), Andres Valloud, WOU (Fourth Place).

“I am so honored to receive this award! A big thanks to all of the coordinators of NUMS/PiMUC for the opportunity to present, listen to other undergraduate research presentations, and win this award. “ -- Kathryn Davidon, UWT 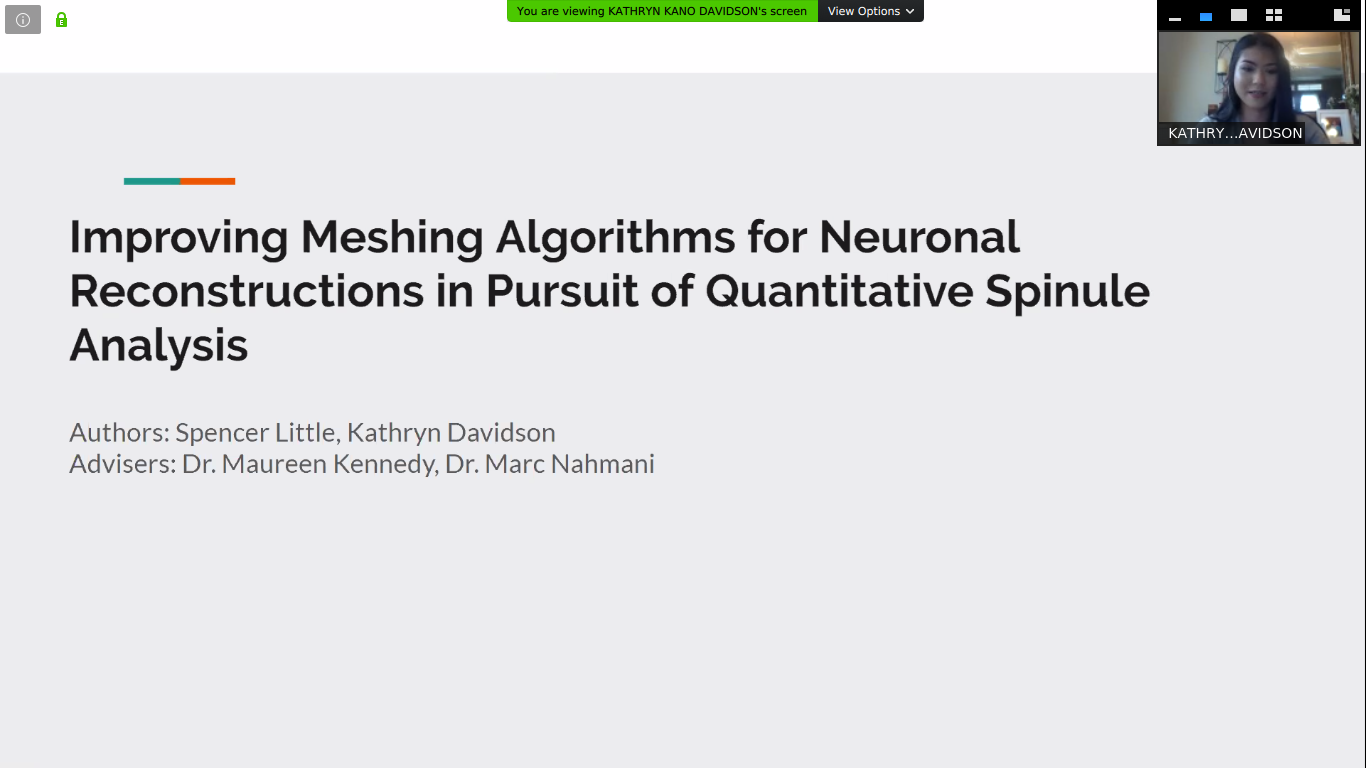 The consensus among the faculty was that many of the talks were exceptional, and it was really difficult to choose which “room” to visit. Some faculty resorted to logging in on multiple devices to watch more than one talk at a time, try that IRL! (IRL: “in real life”.) According to Amy Yielding, Professor at EOU, “I am impressed by all of our speakers.  This term has been rough and I am so pleased to see our students throughout the PNW commit to showing off their excellent work!” 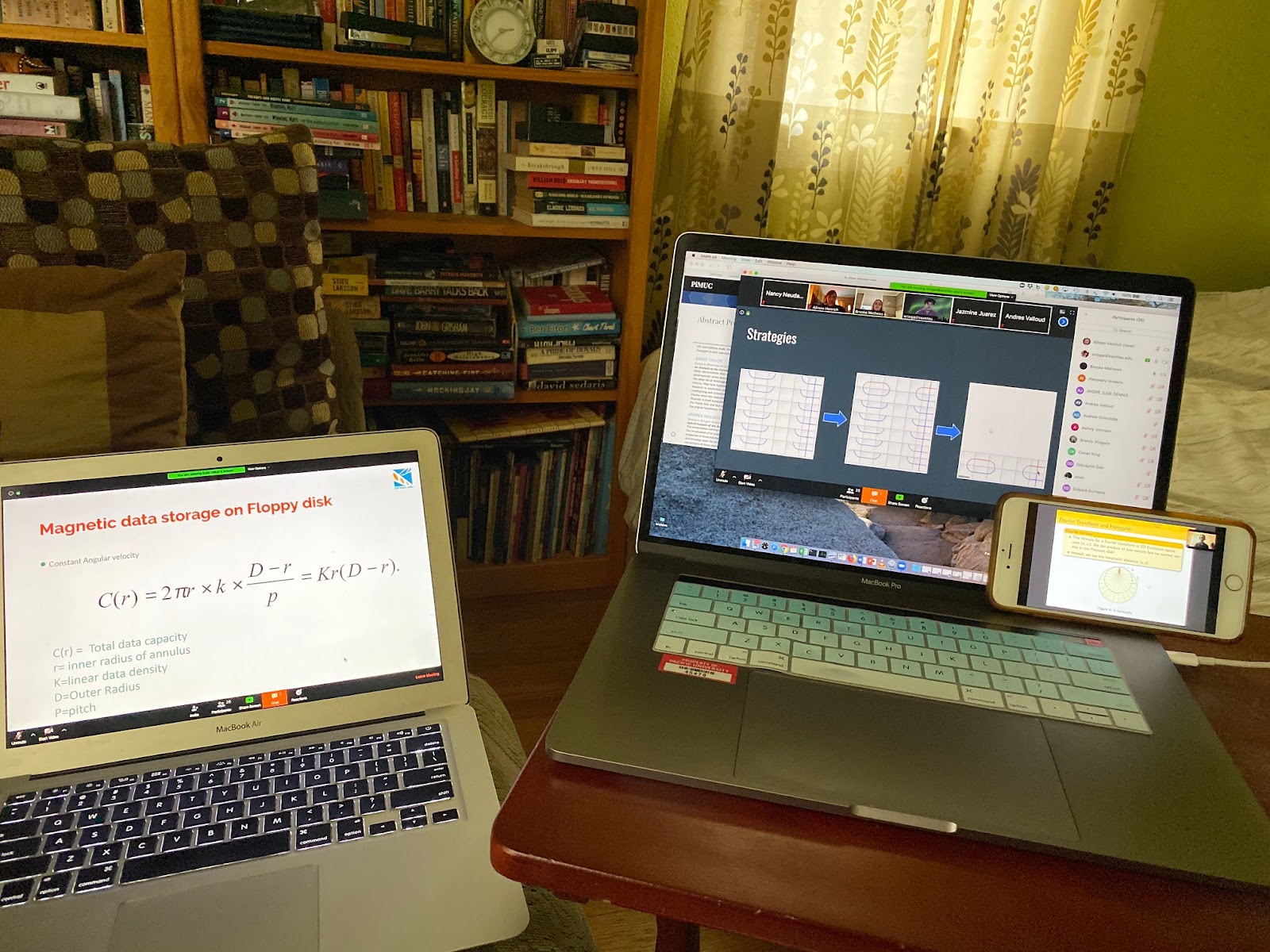 A faculty participant in three talks at once!

Students commented in the chat about how much they appreciated having the opportunity to present their work, in some cases, senior theses which they may never have a chance to present again. Faculty were glad to be able to show funding agencies that the work students had accomplished was being disseminated. Michelle Ghrist, Professor at Gonzaga University, commented “I am amazed at how well it turned out - I've never seen an undergrad conference done this way before, but then again, we're having lots of firsts these days.”  According to Nancy Ann Neudauer, Professor at Pacific University (who helped organize the meeting while being on lockdown in South Africa), “Perhaps we shouldn’t let people know how successful the conference was in this format — They might never fund an in-person meeting again!” She continued, “As smoothly as this went, I also can’t wait to see all my colleagues from the other universities in person next year!”