March 14 is Pi Day around the world, and if you love Pi(e), math and musicals, then the Department of Mathematics has a treat in store for you. The Math Club is sponsoring a special presentation of Calculus: The Musical!, a nationally touring production, on Tuesday, March 14, 2017, at 7:00 p.m. in Milam Hall 026. There will also be a pie reception starting at 6:15 p.m. in the foyer right outside of Milam 026. Everyone is welcome to attend the musical and indulge in their love of pi(e)!

This event is supported by the College of Science and the Department of Mathematics.

Calculus: The Musical! was originally created by Matheatre, composed of Marc Gutman and Sadie Bowman. The musical tells the historical story of the development of Calculus and features several scientists and mathematicians across eras who contributed to the development of modern calculus: Archimedes, Isaac Newton, Gottfried Leibniz among others. 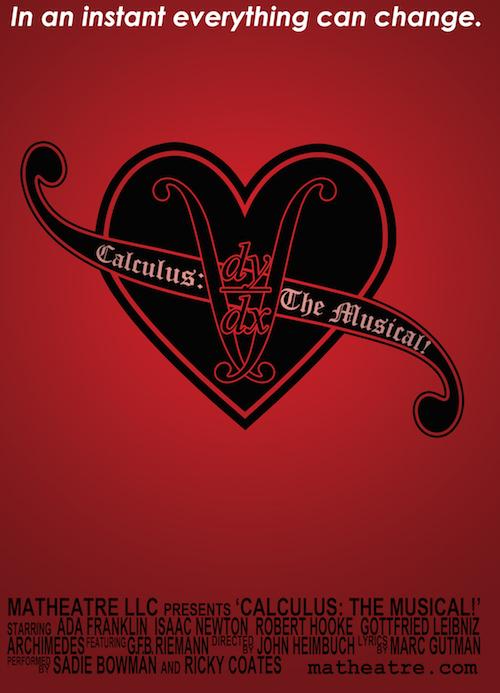 The musical is "a comic review of the concepts and history of calculus." According to its creators, the musical employs a mix of genres from light opera to hip hop to bring alive the concepts of limits, integration and differentiation. It promises to be entertaining to the "arithmophobe and the rocket scientist alike."

What makes Pi so special? Apart from the spirited contests over who can recite the more digits of pi (3.141592653...), pi is enthralling for other reasons. Pi, as we learned in school and memorized for the S.A.T.s, is the ratio of a circle’s circumference (the distance around the circle, represented by the letter C) to its diameter (the distance across the circle at its widest point, represented by the letter d). That ratio, which is about 3.14, also appears in the formula for the area inside the circle, A = πr2, where π is the Greek letter “pi” and r is the circle’s radius (the distance from center to rim).

According to mathematician Steven Strogratz (writing in The New Yorker), the beauty of pi can be attributed to a few factors: 1. Pi puts infinity within reach. The digits of pi never end and never show a pattern.They go on forever, seemingly at random—except that they can’t possibly be random, because they embody the order inherent in a perfect circle. This tension between order and randomness is one of the most tantalizing aspects of pi.

2.What distinguishes pi from all other numbers is its connection to cycles. For those interested in the applications of mathematics to the real world, this makes pi indispensable. Through the Fourier series, pi appears in the math that describes the gentle breathing of a baby and the circadian rhythms of sleep and wakefulness that govern our bodies. When structural engineers need to design buildings to withstand earthquakes, pi always shows up in their calculations. Pi is inescapable because cycles are the temporal cousins of circles; they are to time as circles are to space. Pi is at the heart of both.

Whether you love the mysteries of pi or not, don't miss this unique chance to celebrate the spirit and awesomeness of math!